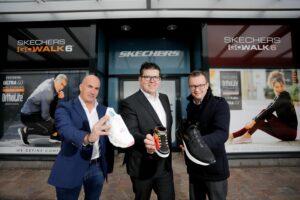 Retailer confidence is high at Lotus Property owned shopping and leisure park, The Junction in Northern Ireland following the announcement that high profile American lifestyle and footwear brand, Skechers, is set to open its doors at the scheme later this year.

Representing a total investment of £410K, the new 3,000 sq. ft unit will create 12 new jobs and will be the first Skechers store in Ireland to offer shoppers a full apparel range and large selection of children’s footwear, alongside its world famous lifestyle and performance footwear.

After a challenging eighteen months in retail, the new store is just one of several leasing deals to be agreed at The Junction – existing tenants, homeware brand Denby and greeting card company Hallmark also committed to new stores at the Antrim-based scheme, supporting a further 13 jobs within the retail sector. Pavers will also soon be relocating to a new 2,450 sq ft unit along with nine staff.

Signing up to the growing plans at The Junction, under renewed leases, each of these established brands have moved to new units, creating fresh and improved store concepts with modernised features to enhance the customer experience further bolstering retailer’s confidence in the Northern Ireland market.

Earlier this year, a £10 million investment plan had been submitted from garden centre retailer, Dobbies to open a 110,000 sq. ft store, which will be the brand’s second store in Northern Ireland and one of the biggest within its portfolio. The new store will create in the region of 150 new full and part-time roles, making it one of the biggest employers at The Junction.

The positive leasing announcements come just as The Junction records a +10% increase on sales figures in September, compared to the same month in 2019, with many individual retailers trading up week-on-week this Autumn.

“It’s been a very exciting and positive few months at the scheme since the announcement of Dobbies’ £10 million investment plans, and we’re delighted to announce the arrival of Skechers, which will be a very welcome addition to The Junction, growing our retail offering even further.

“The retail industry has been one of the worst affected sectors since the COVID-19 pandemic, but both the Skechers announcement and existing tenancy renewals signal a positive step forward and we’re looking forward to sharing further exciting updates regarding The Junction’s redevelopment with both retailers and customers in the coming months.”

Managing director of Skechers Ireland, Paul Gallagher, spoke about the brand’s plan to open at The Junction:

“We are delighted to open a new store at The Junction as we continue moving confidently forward with our long-term investment plans in Northern Ireland.

“Our recruitment process has already commenced and we’re proud to be bringing new employment opportunities to the local community.”