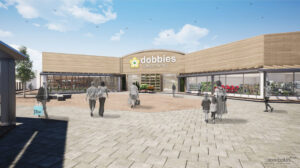 21 March 2022: Planning permission has been granted for a 110,000 Sq ft Dobbies Garden Centre in Northern Ireland – one of the largest retail lettings in the UK and Ireland in recent years.

The £10m project at The Junction, a Lotus Property-owned retail and leisure park, will be Dobbies’ second venture in Northern Ireland, its largest store in Ireland and one of the largest in its UK portfolio.

Proposals for the 110,000 Sq ft store include outdoor and indoor plant areas; areas for gardening products, outdoor furniture, pets, gifting and toys, as well as cookshop and home décor; a foodhall, a children’s soft play area and new restaurant and café.

The store is expected to attract a footfall of around one million visitors per annum, creating 110 new full and part-time jobs, making it one of the largest employers at The Junction.

“We’re thrilled to receive the news that planning permission has been granted for this flagship store. Not only is it fantastic news for The Junction and the local economy but also a signal that Northern Ireland is open for business. It is fast becoming one of the UK’s most promising retail environments, especially with regards edge of town shopping and leisure.”

“This is a hugely significant retail letting in Northern Ireland to what will be one of the largest Dobbies Garden Centres in its portfolio.  The scale of the store will allow Dobbies to deliver a tremendous customer experience, which is anticipated to bring up to one million customers per year. The scale of the signing is testament to the importance of physical retail stores and the continued strength of edge of town retail schemes.”

“We’re delighted to have been given the green light to move ahead with our plans to open our store at The Junction, building on the success of our established Lisburn garden centre.

“Its prime position off the M2, just north of Belfast City Centre and towards the popular Antrim coast, will allow us to bring the Dobbies’ experience to a new area within Northern Ireland.”

Dobbies was founded in 1865 as Dobbie & Co and has grown and expanded in recent years to become the UK’s leading garden centre retailer. There are currently 74 Dobbies stores throughout the UK, but this will be just the second in Northern Ireland.